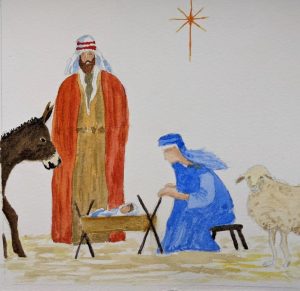 “But you, Bethlehem, in the land of Judah, are by no means least among the rulers of Judah; for out of you will come a ruler who will shepherd my people Israel”

Our mail came late today and it contained a letter from the hotel Kathryn and I stayed at in January this year. We spent three weeks on Cyprus at a lovely hotel where the staff, environment & food were excellent. We decided we would go back for a second trip in January 2021! The letter brought back lots of memories and some disappointment that it was not to be.

This morning’s news had an article about schools starting later next year, COVID testing for all students and staff and the problems of organising this. Then there was an article about Brexit and the hours left to achieve some kind of deal. After which I thought going back to bed for the whole of 2021 might be a good idea.

One of the problems I have with our current news presenters isn’t really about the news they give but the way they do it. There always seems to be a sense of hopelessness about it. That might be just me, but the number of people I know who have said they have stopped watching the news leads me to think otherwise.

There doesn’t seem to be much good news being spread about at the moment; which given the circumstances is understandable. Does that mean there should be a sense of hopelessness? A sense of unease about the future?
Sometimes Christians can feel a sense of guilt because they think they should be filled with joy and hope regardless of the circumstances because of our relationship to Jesus Christ. But; what we are called to be are disciples of a man who was a friend of sinners, lepers were not afraid to approach him even though for them to approach a healthy person could result in being stoned.

‘Those who walk in darkness have seen a great light.’ Where is that light today? Jesus said to his disciples: ‘You are the light of the world….. let your light shine before others.’ For 20 centuries that light has shone through God’s people. But take note, it’s in the darkness when the light is seen most brightly.

In the 3rdC AD, a terrible plague struck Rome, the death rate was in the region of 5,000 a day. The wealthy people fled the city. Dionysius, a Bishop, wrote; ’Heedless of the danger, they took charge of the sick, attending to their every need, and ministering to them in Christ. And with them departed this life serenely happy, for they were infected by others with the disease.’

Emperor Julian, who opposed Christianity, 100 years later chastised the pagan priests for failing to mimic the Christian believers. He was angry that his priests did little when the Christians were looking after their own and the non-believers who were suffering.
Basil, an early church father, took a lead from Christ when he established a community to care for and serve those with leprosy. It was one of the foundations of what came to be known as hospitals.

Jean Henri Dunant witnessed the suffering of injured soldiers left uncared for on the battlefield. In response to their need, he established what we know today as The Red Cross. Serving not just soldiers but any in need anywhere in the world.
Today there are numerous examples of churches reaching out into communities to support the vulnerable: perhaps the most well-known contemporary example is the Trussell Trust and their food banks. Started by Paddy and Carol Henderson; it is a remarkable and wonderful story and can be found on the web.

There are far too many examples to list but history is full of instances where in a crisis, when things look bleak Christians have risen to the challenge of serving and caring for others.

A baby born in an obscure village in an insignificant country to a couple of teenagers grew into manhood and ministered for three years and was murdered. Three days later God began his new creation. Today His people of that new creation are engaged in battle with the old and the light is shining brightly.

It doesn’t matter what society wants to call this season: Global festivities, winter solstice, Xmas etc. we shall still celebrate the incarnation. The Word became flesh and dwelt among us. And that man has inspired people beyond number to service and sacrifice over 20 Centuries. His life has changed the world and continues to drive his people on.

2021 won’t be a gloomy year regardless of COVID, Brexit, and whatever else is going to happen. Let’s think of it as a year of opportunity to let the light shine.

Kathryn and I would like to wish you all a happy and peaceful Christmas and New Year. 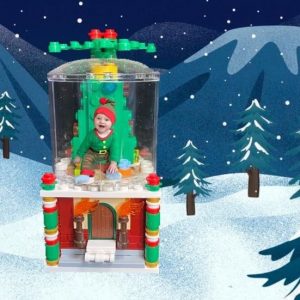 “I think Charlie’s parents have taken the idea of being in a bubble, a little too literally!”